A study by the University of Valencia (UV), the CSIC, the CIDE (Desertification Research Centre) and the Valencian Institute for Agrarian Research (IVIA) shows that pymetrozine and flonicamide, two insecticides recommended in some integrated management programs pests (GIP), can negatively affect biological control agents when they feed on honeydew. The work, applied to citrus fruits, has been published in the journal Environmental Pollution.

Integrated Pest Management (IPM) is based on the application of a combination of agronomic, biological and biotechnological measures that minimise the use of pesticides. When pests exceed treatment thresholds and pesticides must be used, they must be effective and respectful of biological control agents. The study of the secondary effects of pesticides is, therefore, key in GIP, especially in crops such as citrus, in which most pests are regulated by biological control agents.

“The study showed that molasses contaminated by pymetrozine and flonicamide increased the mortality of Sphaerophoriarueppellii by between 20 and 50%, respectively”

Pymetrozine and flonicamide are systemic insecticides that are generally used to control aphids in a large number of crops such as citrus fruits. It has been found that when aphid treatments are performed with pymetrozine or flonicamide, other pests such as whiteflies and mealybugs commonly found on the same treated citrus in amounts not exceeding treatment thresholds, excrete flonicamide or pymetrozine through their honeydew. “Honeydew is a sugary excretion of some insects that feed on the sap such as whiteflies, mealybugs, aphids or psyllids. This excretion is one of the main sources of food for biological control agents and some pollinators”, explains Miguel Calvo Agudo of the Valencian Institute for Agrarian Research (IVIA). 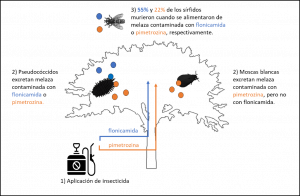 “The study showed that molasses contaminated by pymetrozine and flonicamide increased the mortality of Sphaerophoriarueppellii by between 20 and 50%, respectively. However, these molasses were innocuous for the parasitoid Anagyrusvladimiri (Anagyruspseudococci), one of the main biological control agents of Planococcuscitri”, highlights Joel González Cabrera, Ramón y Cajal researcher at the University Institute of Biotechnology and Biomedicine (BIOTECMED) of the UV.

Yolanda Picó and Daniele Sadutto, researchers at CIDE, a joint centre with the Valencian Government and the CSIC, have also participated in the work on behalf of the UV. “The results of this study indicate that contaminated molasses are likely to affect a much wider range of beneficial insects than contaminated nectar and, therefore, should be included in future environmental risk assessments”, said Yolanda Picó, professor of the Department of Preventive Medicine and Public Health of the Faculty of Pharmacy of the UV.

The study has been partially funded by a project of the National Institute for Agricultural and Food Research and Technology (INIA, RTA2017-00095). The University of Wageningen (Netherlands) has also participated in the work.