The secret of the survival of the turtles

A priori, the qualities of the Greek turtle (Testudo graeca) are all handicaps: it is very slow, small, it does not regulate its body temperature, it needs to hibernate and does not live as long a Galapagos turtles. However, recent studies indicate that the Greek turtle has a secret weapon: the capacity of the females to store sperm for, at least, four years.

After copulation, the female Greek turtle stores the sperm in tubules in the oviduct area of the genital tract. When the ovum matures in the ovary, it moves down the oviduct and can be fertilised with the stored sperm. This is one of the conditions of the study in which researchers from the UMH, the University of the Balearic Islands, the University of Zaragoza, the National Scientific Research Council and the UFZ Environmental Research Institute of Leipzig (Germany), are taking part.

According to the Stepland programme, if the capacity to store sperm were to fall to a single reproductive period, many populations would become extinct in around 200 years

As part of this project, the UMH has developed the Stepland model, which simulates and predicts the behaviour of Greek turtle populations against the backdrop of climate change, growing pollution and a loss of habitat due to fires, drought or human intervention. According to the Stepland programme, if the capacity to store sperm were to fall to a single reproductive period, many populations would become extinct in around 200 years.

This biological trait compensates for the species’ reduced mobility given that it can live its whole life in 0.2 hectares. The spermatheca is the key evolutionary trait for the maintenance of Greek turtle populations and it has been discovered that this factor could be significant in the future given the current context of the loss and fragmentation of its habitat, which isolates turtles.

Much remains unknown about this characteristic which, among other consequences, often gives rise to multiple paternity, whereby the eggs of a single clutch may come from different reproductive males (from the last four years). Another aspect to be investigated is whether, in the field of turtle spermatheca, the phenomenon of “sperm competition” occurs, whereby some male reproductive cells impose themselves at the moment of fertilisation or whether this occurs depending on whether mating occurred more or less recently.

Origin and evolution of the Testudo graeca

The Greek turtle, native to the Caucasus 5 million years ago, has natural populations in various parts of Asia, Africa and Europe. In Spain, it has lived for 20,000 years in the southeast of the peninsula, between the Regions of Murcia and Almería and, since ancient times, in Mallorca and the Doñana National Park, as well as Ceuta and Melilla.

Using different genetic analysis techniques, the UMH researchers analysed more than 400 specimens in 18 sites in the southeast of the Iberian Peninsula, Morocco and Algeria. By genetically distinguishing Iberian from North African turtles, they realised that humans continue to influence the distribution of these populations, since some specimens had been introduced recently. They also discovered that the origin of the population in the southeast of the peninsula could be an area close to Orán (Algeria) and their most likely arrival point would be the Vera basin (Almería).

Studying the origin of the Greek turtle in the southeast of the Iberian Peninsula has served to understand the genetic adaptation of species in the context of climate change. In 2013, some research found traces of so-called “genetic surfing”, a recently described phenomenon, in Greek turtle populations. According to this concept, as the expansion of a species progresses, it loses genetic diversity, gradients and even homogeneous sectors are generated and significant differences are attained in a small area of land. Thus, chance, together with a capacity for slow dispersal and a low density of individuals, can shape the genetics of the expansion processes of organisms, something that has, until now, been attributed to natural selection. 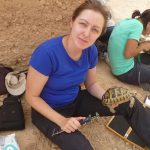 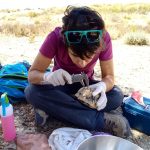