Saffromfood: the benefits of saffron beyond colouring

Hidden inside a flower, the most coveted spice in the world is found: saffron. It is used as a colourant in recipes such as paella, but its properties go beyond this. This is what Saffromfood, a project of the Department of Agriculture and Food Technology of the Higher Polytechnic School of Orihuela of the Miguel Hernández University (UMH) of Elche, intends to demonstrate.

The countries that produce the most saffron are Iran and Spain, respectively. However, the organoleptic or sensorial properties and the size of its stigmas make Spanish saffron the most coveted. This is due to the treatment it is given during the harvesting and conservation processes. In Spain, the first saffron flowers bloom in the middle of October, although this depends on weather conditions. Harvesting is performed manually, and the separation of the stigmas should be done the same day, otherwise the flower withers and loses properties.

The team from the UMH is trying to analyse the effect that the bioactive ingredients have on stress or depression. In these cognitive disorders, the three chemical messengers that act on the nervous system should be taken into account: noradrenaline, dopamine and serotonin. Notwithstanding, the neurotransmitter that is best known for its involvement in depression is serotonin since a relationship between low levels of serotonin and the onset of mood disorders such as depression has been established. Currently, there are serotonin reuptake inhibitor drugs (MIRS) that are used as antidepressants by raising levels of this neurotransmitter in the brain.

The initiative therefore intends to prove whether the bioactive compounds contained in the stigmas and the saffron petals could have a mild to moderate effect on the treatment of depression, as well as memory and learning ability. Some studies propose that crocin could inhibit the reuptake of dopamine and noradrenaline (IRDN), in the same way that safranal could be an inhibitor of serotonin. By blocking the reabsorption of this neurotransmitter, the amount of available serotonin would rise since it remains in the brain for longer. However, the mechanisms responsible for these effects on a neurological level are not fully understood.

The project, which has been selected by the European Union and the Partnership for Research and Innovation in the Mediterranean Area foundation (PRIMA) for funding, will be developed at the UMH and at other universities and research centres in Spain, Italy, France, Germany, Algeria and Portugal.

Other properties of saffron

The benefits of this spice go beyond colouring, aroma and taste since they activate different glands, including the hepatic, digestive and gastric glands. They thus promote digestion. Responsible for this action are the alkaloids, which are organic compounds capable of producing an intense physiological action so taking large amounts is not recommended since they can be harmful to the body. On the other hand, the bioactive properties of this spice are antioxidant so they help protect neurones against any oxidative damage that could lead to tissue deterioration. Similarly, saffron has an important nutritional quality since it provides fibre and micronutrients such as potassium, phosphorous, calcium, magnesium as well as vitamin C and B group vitamins. 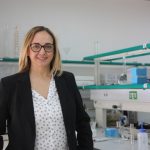